Recognizing the benefits of extroversion and networking as well as the prospects for the development of substantial partnerships, the Municipality of Larissa has created within the Department of Operational Planning an internal team of staff involved in the search of competitive European programs, the participation of the Municipality in partnerships, coordination of approved projects and support initiatives such as:

In this context, the Municipality has developed important collaborations with relevant stakeholders sharing common objectives and challenges in Europe, with the goal to exchange experiences and know-how, making the most of the available programs and financing tools.

Contact: Lia Gkountroumpi, Maria Nikolaidou. Tel .: 2413 500237, e-mail: This email address is being protected from spambots. You need JavaScript enabled to view it.

One of the world’s leading trends is the increased percentage of urban population. This means that cities are potentially an important area of intervention in multiple sectors (environment, innovation, culture, social policies, employment, education, etc.)

International Networking is a priority and an exceptional tool for modern cities, as it is an opportunity for the representation of local authorities and the cooperation on the challenges that urban areas have to face. Also, they provide a framework for the promotion of innovative ideas and practices as well as the exchange of experiences in an international level.

Participating in City Networks (European or global), beyond Larissa’s extroversion benefits also include opportunities for the Municipality's (as well as the entities of the city) participation in partnerships and programs, European and global events and conferences, but also the transfer of experience and technical knowledge.

In this context, the municipality of Larissa participates in the following networks:

The CIVITAS Forum initiative, launched by the European Commission in 2000, focuses in cities that want to develop and implement measures for the improvement of urban transportation and to apply them on a large scale. Cities wishing to participate should confirm their political and technical commitment to integrated urban mobility and transport strategies. The Network Thematic Groups act as a platform of communication and exchange of experiences and knowledge among experts and representatives of local government on issues of sustainable mobility and, indicatively, refer to:

Participation to the network is made on request, requiring signature of the network's declaration, while there is no subscription fees.

The European Covenant of Mayors on Climate and Energy brings together housands of local authorities who are voluntarily commited to implement the EU's climate and energy goals.

The Covenant of Mayors started in 2008 in Europe, aspiring to bring together local authorities tha are voluntarily to achieve and surpass the EU's climate and Energy goals.

The iniciative brings together more than 7.000 local and regional authorities in 57 countries and exploit the advantages of a global multilateral movement and depend on the technical and methodological support provided by specialized offices.

The Global Covenant of Mayors exploits the experience gained over the last 8 years in Europe nad beyond and is based on the main success factors of the iniciative: bottom-up management, multilevel cooperation model and concrete accion framework.

The Covenant of Mayors on Climate and Energy is open to all local authorities, with a democratic composition of elected representatives, regardless of their size and the implementation state of their energy and climate policies.

Small and medium-sixed local authorities may also, under circumstances, decide to participate as a group of signatories.

The Covenant signatories are commited to adopting an integrated approach to migration and adaptation to climate change. They will need to develop a Sustainable Energy and Climate Action Plan within the first two years of their accession to reduce CO2 emissions by at least 40% by 2030 and increase climate resilience.

ICLEI-Local Governments for Sustainability is an international Network of more than 1500 cities around the world, that are committed to the principles of sustainability, addressing social, demographic and environmental issues, as well as other challenges related to urban areas. The aim is the cooperation of local and regional authorities for the making of changes through collective learning, exchanges and skills development.

ICLEI has also a European Secretariat, based in Freiburg (Germany) with an active presence in the European Sustainable Cities Campaign, while it also supports the Covenant of Mayors.

Participating in the network includes an application and a subscription fee, which depends on the size of the city and the per capita GDP of the country.

The main areas of activation of the network include:

The network of Major cities of Europe constitutes over the last 30 years, a stable frame of reference of the most important representatives of local government of multiple European cities on issues of new technologies and innovative services.

It’s a non-profit, independent community of innovative municipalities that aims to share experiences and good practices, to promote innovative solutions and integrated technologies and business models through an open and cooperative background.

The community of Major Cities is an opportunity for networking and cooperation with experienced suppliers of ICT services, with important national governmental organizations both in Europe and in America. Some of the local authorities that are members of the Network are: Hamburg, Tel Aviv, Dublin, Oslo, Barcelona, Boston, Birmingham, Berlin, Trieste, Uppsala, Rome, Zurich, Geneva, Trikala, Genoa, Eindhoven, Leipzig, Livorno, Prato, Ljubljana

There are also several organizations that are members of Major Cities:

It’s a network of cooperation between not only municipalities but also organizations that aim to promote rivers or coastal fronts in their cities as culture areas. For the participation to the network only signing of a memorandum of understanding is required.

The main objectives of the network are:

«Learning City» is an innovative project that aims to intervene dynamically at the level of lifelong learning. In January 2016 the city of Larissa was the first Greek city that became member of the Global Network of Learning Cities – UNESCO which aims to:

The Cities Network for Integration (CNI)

The Cities Network for Integration (CNI) inspires its members to exchange and plan coordinated activities and interventions at local and national level, aimed at promoting social integration of migrants and refugees and strengthening social cohesion.

The CNI launched its operations in January 2018, based on a memorandum of understanding between the two largest Municipalities of Greece, Athens and Thessaloniki, paving the way for a common framework for cooperation.

At the initiative of Athens, since April 2020, the CNI is supported by IOM Greece and UNHCR Greece on the basis of a trilateral cooperation with the Municipality of Athens.

Based on the priorities set by the participating Municipalities, the two international organizations provide the necessary technical means to develop mechanisms and procedures that promote initiatives with long-term benefits for both host societies and refugee/ migrant populations.

Today, the Network consists of 18 Municipalities, with a total population of 3,103,893 inhabitants. 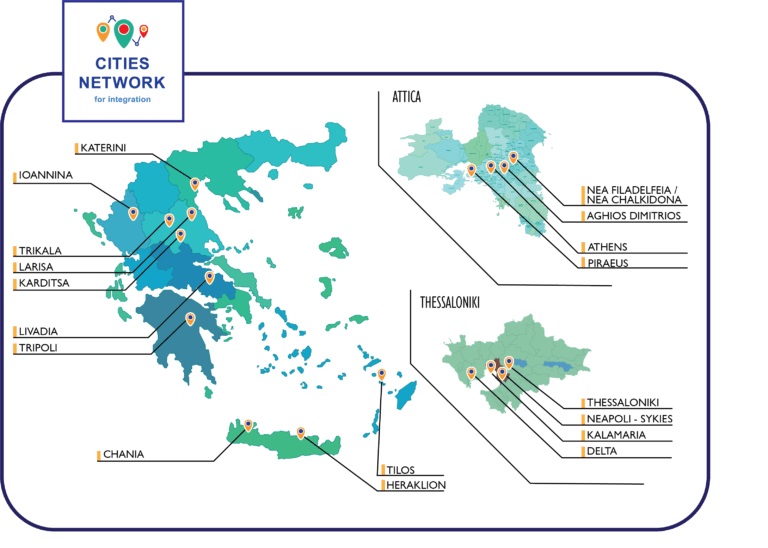